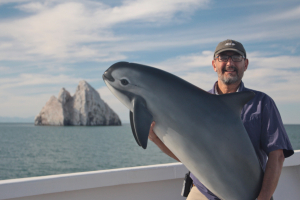 SCB North America selected Dr. Lorenzo Rojas-Bracho for The Edward T. LaRoe III Memorial Award for his unwavering leadership and dedication to the conservation and recovery of marine mammals, most notably the vaquita porpoise (Phocoena sinus), endemic to the upper Gulf of California and the most endangered marine mammal on the planet.

Not only is Dr Rojas-Bracho considered the world’s foremost authority on the biology of the vaquita, he has chaired the International Committee for the Recovery of the Vaquita since its inception in 1997, leading and catalyzing international efforts to save the species and working to spur action by the Mexican government on behalf of the vaquita. 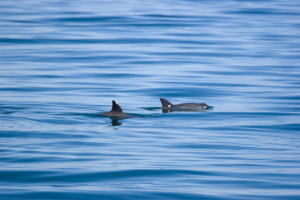 Two vaquitas in the upper Gulf of California

The LaRoe Award targets individuals who show leadership in government service and translate the principles of conservation biology into real-world conservation. SCB North America is thrilled to recognize the career and contributions of Dr. Rojas-Bracho with this award.

Lorenzo Rojas-Bracho’s impressive career in the field of marine mammal biology and conservation began in the 1980s, with his work on vaquitas commencing in the 1990s, including his PhD dissertation research. In the ensuing decades, Dr. Rojas-Bracho has led multiple scientific expeditions, served on and led numerous commissions and committees dedicated to vaquita and marine mammal conservation, authored and co-authored over one hundred scientific articles, book chapters and reports, and championed community- and science-based approaches to the conservation of vaquitas.

One of the letters in support of Dr. Rojas-Bracho’s nomination for the LaRoe Award described his impact on vaquita conservation:

“I can think of very few other instances in which the conservation of a species is so directly linked to the tireless of work of a single individual. Lorenzo has been the face of vaquita conservation inside Mexico and to the rest of the world. He has skillfully marshalled scientific expertise, resources, funding, and political will to the cause of this species, often in the face of skepticism, hostility, and even threats of violence from supporters of the totoaba fishery in Mexico. …The continued existence of this critically endangered species owes a great deal to the persistent efforts of Dr. Lorenzo Rojas-Bracho.”

Dr. Rojas-Bracho accepted the LaRoe Award virtually on July 19 during the SCB North America Members Meeting at NACCB 2022. Please see the award announcement with his acceptance address in the video recording below.